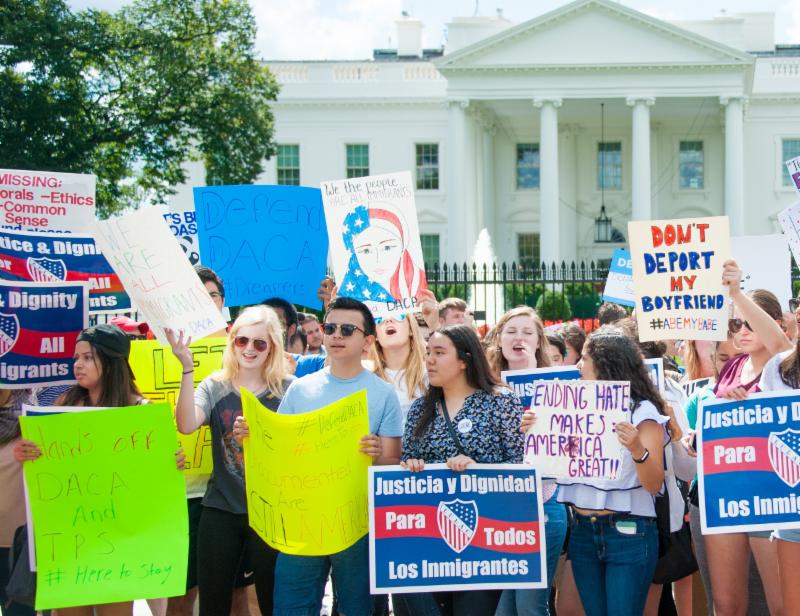 Lawrence J. Fedewa (January 29, 2018)
The Deferred Action for Childhood Arrivals (DACA) originally referred to a program invented by President Barrack Obama in 2014. It granted a temporary authorization to stay in the U.S. to children whose parents came to the United States illegally and who are thus officially classified as “illegal aliens”. Since this was an Executive order, not a law, its existence is dependent on the continued authorization of the new administration. For DACA to become the permanent law of the land, both Houses of Congress and the president must sign off on it.
Republicans have opposed this Executive Order because they believe that the illegal actions of the parents should not be rewarded with citizenship, but rather punished for breaking American law and therefore deported to their country of origin – presumably along with their children (although this position has been softening recently). They call the Obama position “amnesty” and fear that ratification of that policy will create an incentive for more illegal immigration, in defiance of American law.
There are an estimated 800,000 to 1,000,000 children of illegal immigrants living in America today, although no truly reliable estimate exists. There may be more, perhaps as many as a few hundred thousand more. What should we to do with them?
END_OF_DOCUMENT_TOKEN_TO_BE_REPLACED

Pope Francis I earned the admiration of many when he promised to make the Catholic Church “a poor church for the poor.” I think of that every June when the Peter’s Pence collection is taken up in all the Catholic churches worldwide. The purpose of the collection is to support the Vatican’s donations to the poor. A serious scandal occurred when it was learned a few years ago that 80% of the collection’s $80 – $100 million proceeds were used to offset the Vatican Curia’s operating deficit (National Catholic Reporter, 11/23/2013).

The larger question is, “Why does the Vatican have a deficit at all?” In fact, why is there a Peter’s Pence in the first place? The Vatican has accumulated its wealth over 2000 years and no one really knows how much net worth the entire operation has. Britain’s International Financial Times (7/19/14) quotes Italian newspaper, L’Espresso’s estimate of the Vatican’s net worth as nearly 10 billion Euros ($12 billion). But Cardinal George Pell, who oversees Vatican finances, said recently, “In fact, we have discovered that the situation is much healthier than it seemed, because some hundreds of millions of euros were tucked away in particular sectional accounts and did not appear on the balance sheet.”

Not only is the balance sheet enormous, but cash flow is even more impressive. The 800 inhabitants of th Vatican average $365,796 per capita, making the Vatican the richest state on the face of the earth! (Ibid.)

So, the fact is that nobody knows how much wealth resides in the Vatican. What we do know is that Pope Francis uttered a new standard when he said to a group of seminarians, “It hurts my heart when I see a priest with the latest model car. If you like the fancy one, think about how many children are dying of hunger in the world.”

Leaving the rest of us to wonder, how many starving children in the world could be fed with $12 billion?

In order for Pope Francis to “walk the walk”, he has to know what he is dealing with. We humbly suggest that his New Year’s resolution be, “Resolved to make Cardinal Pell’s mission to find and record the totality of the Vatican’s resources the top priority for 2018.”

Next year’s resolution should be how to monetize and distribute that wealth to the poor of the world.

Last evening I was the guest of a radio interviewer in Scotland. He began by remarking that a poem I  recorded on YouTube was so inspiring that he wanted to play it before we began our interview. He called it universal in its appeal to all people who seek freedom and justice, even though it is an American calling out to his fellow citizens. I was touched as I heard my voice and my message being heard by people in foreign lands. Later, I realized that this video was not available even on my own website. So here it